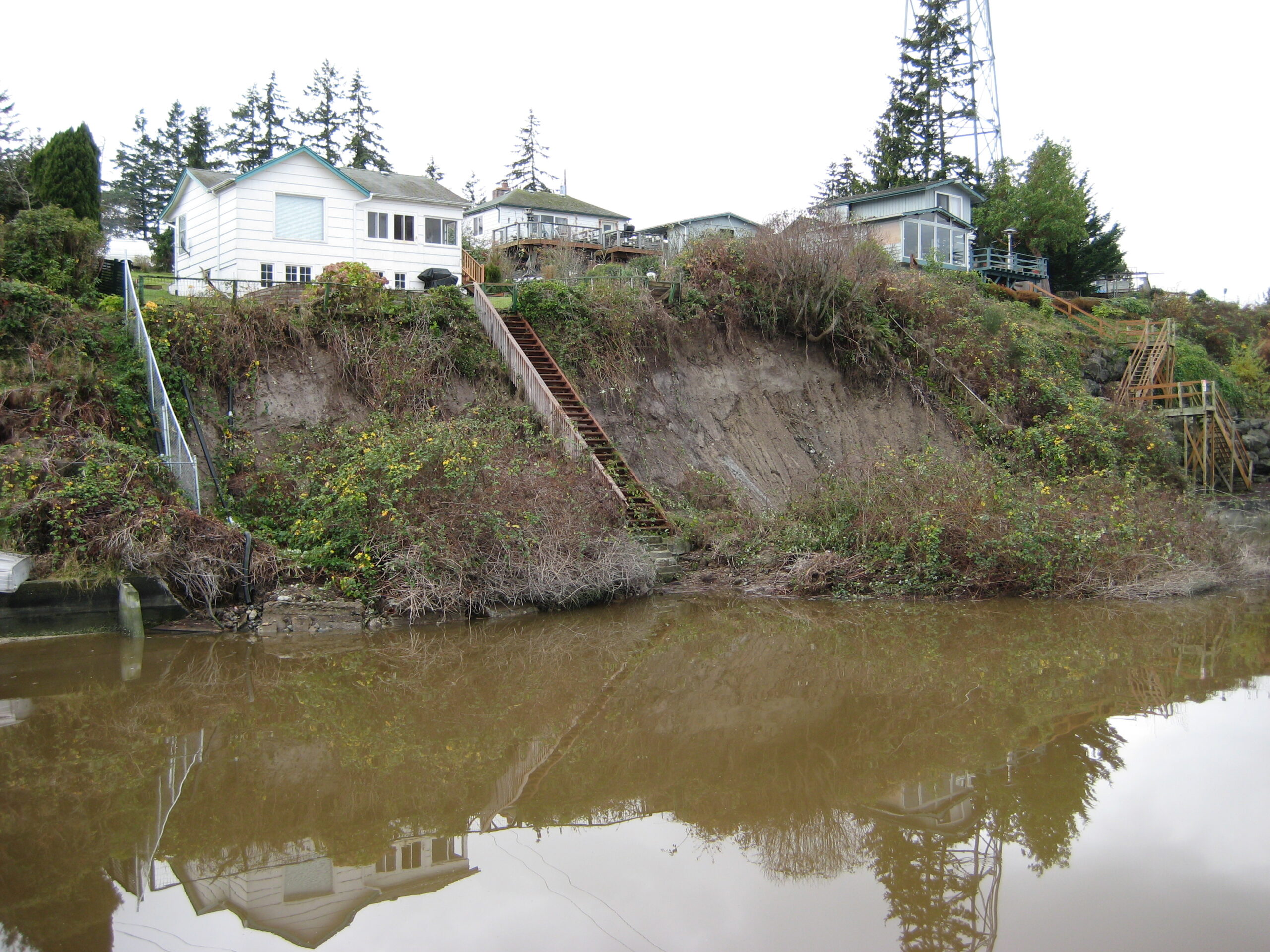 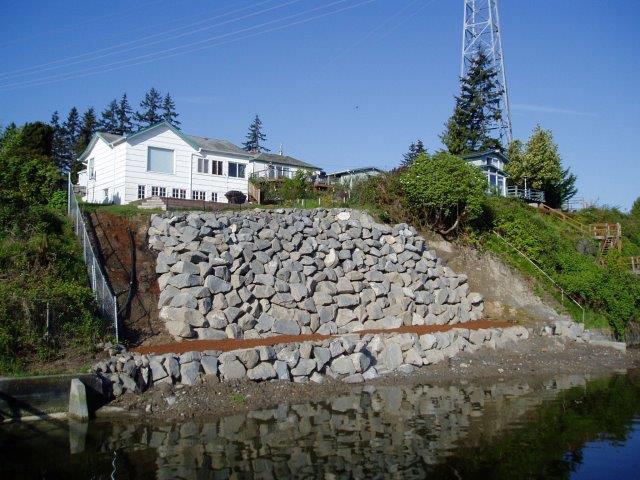 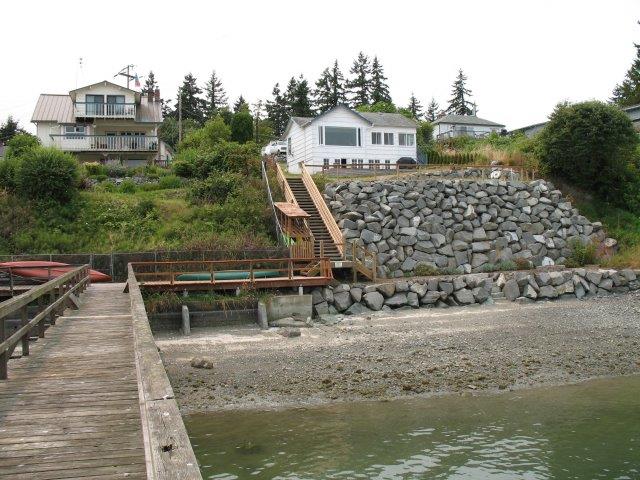 “The Great Coastal Gale of 2007 followed uncharacteristic snow and produced record rainfall (7.5 inches in 24 hours) in Kitsap County in early December. The high dirt bank of our property, which has even more hillside above it, could not handle the hydro-static and -dynamic forces of all that water and gave way, blowing many yards of dirt and the old concrete bulkhead well out into the bay. What started out as a mini-disaster for us (fortunately, we had no injuries or structure damage) ended up being one of the best things to happen with our property…and it would not have ended up that way without my partnership with Sealevel Bulkhead Builders.

Having no preparation for such a situation in place, fearful that more of the bank would subsequently fall away and take the house with it, and not really knowing what to do, I turned to neighbors, the local port commissioner and other shoreline property owners for recommendations. Sealevel Bulkhead was quickly and repeatedly recommended. Despite being pressed for time, to satisfy my wife’s and in-laws’ more cautious natures, I also contacted two other companies that were in this line of business.

Sealevel started to separate themselves from the others right away. I worked with a few different people there and they were all very responsive and easy to work with. They were thorough and thoughtful in answering my questions. My job is as a Program Manager, so details and completeness matter. Although we had plenty of phone calls and several face-to-face onsite meetings, my preferred communication method was e-mail as I like everything well documented. Sealevel was great in all ways that I wanted to communicate.

For my project, Sealevel’s selection as my retaining wall company was sealed when they were the only ones who really listened to what I wanted as a finished product and worked creatively to get it done. While the other companies would happily sell me on using materials (like wood, concrete and steel) and techniques (like multi-step terracing) that would be relatively easy to install, last “a long time” and do a “good enough” jog of stabilizing the hillside, the end result would be aesthetically unpleasing, diminish the functionality of my constrained property by taking up so much of a sloped hillside, and some proposed solutions would require maintenance/rebuilding at some time in the future. Only Sealevel was able to take this to a place well beyond just stabilizing a dangerous hillside.

I wanted a single wall nearly 20 feet tall that rises nearly straight up (i.e. no terracing) and looks good. I wanted room for a nice wooden stairway to go from the house to the water (built by a different company, but needed to be accommodated in the wall design.) I wanted flat space where my family and I could lounge down by the water, even at high tide, and a place to safely store our kayaks. And, I wanted some flat, usable space at the top to become the conveniently usable “back yard” that the house never really had because the entire property is on a fairly steep slope. I wanted to make lemonade out of the lemons the storm delivered.

Sealevel’s approach was to build an aggressively vertical rock wall. But, standard/common basalt rocks used in many shoreline structures, like 6-foot high bulkheads, wouldn’t be stable and strong enough for a wall of the height my property needed. So, Sealevel worked with a structural engineering firm to design a wonderful interlocking, slightly sloping solution using large, granite boulders. Sealevel then found the best granite for the job from a quarry in Canada…and had the rocks trucked down for us.

There are many permits to obtain and regulations to follow. In addition to Kitsap County permits and inspectors, we needed to coordinate with Shoreline Protection people, the Army Core of Engineers and the Washington Dept of Fish and Wildlife. From the design, to permits, to granite boulders, to barges and tug boats and whatever else was needed, Sealevel arranged everything.

Due to the difficulty of accurately measuring the height of a fallen dirt hillside above a beach that is covered in 3-4 feet of very sloppy mud and rubble, the original plans were about 3 feet short of the actual needed height of the big wall. As we realized this, we had the option of stopping the wall per the drawing, which would have resulted in a sloped back yard…and would have been very disappointing to me. Or, we could pursue finishing the job per my vision. In less than a day, Sealevel consulted with the structural engineering firm, got the design drawings modified and then the needed permit approval from Kitsap County. With virtually no delay at all in the work, we were back on track.

I couldn’t be happier with the results. I got everything I wanted. We now have an 8-foot deep “landing” at the bottom running the entire shoreline, where we have a firepit and integrated concrete stairs going down the last 5 feet to the beach. We also have a new 12-foot deep flat yard at the top of the wall, where we only had a steep, dirt and berry vine hillside, before. We installed a lawn and a hot tub and we now have an awesome view of the bay and the boats going by.

One of the most amazing things about the work Sealevel did is that it was very cost comparable/competitive with the initial quotes from the other companies (even thought their designs were completely unacceptable.)

Although this isn’t the kind of work that everyone needs, I have successfully recommended Sealevel several times to people who know of my story from when it happened, have heard about it through the grapevine or in talking with boaters who pass my property and ask about the wall. In the couple of times I was able to follow-up, I was pleased (but not surprised) to find out that they were very happy with their results, too.

My Sealevel story is why I couldn’t be more enthusiastic about recommending Sealevel Bulkhead Builders to anyone who could benefit from their services. “